July Only Flash Sale! Save $395 on Every Window, $975 on Every Patio Door, plus Special Financing!

A Home Channel News website article dated December 9, 2013 covers a historic moment for Andersen Windows, which is famous for its high-quality windows that combine superior performance with beauty and elegance. Andersen Windows commemorated the production of its 1,000,000th “100 Series” model, marking a milestone for the company’s achievements. The company’s product is highly regarded, as noted in the article: “We’re so proud that one of the most innovative windows on the market is built by the excellent employees in Garland,” said Lendall Mefford, plant manager. “The care and craftsmanship that we put into each and every window is on display in homes across Texas and the country.”

The eco-friendly window is made with reclaimed wood fiber that contains 18 to 24% recycled content. It is also designed with energy-efficiency and durability in mind: its Fibrex material is two times stronger than vinyl and doesn’t require painting.

Fibrex might sound like fanciful fluff to many a skeptic, yet the product has some very real benefits. Homeowners suffering from old and worn windows might want to consider making the switch to Fibrex before it’s too late. Fortunately, there are many local retailers who offer such superior New Jersey windows, such as Renewal by Andersen® of Greater Philadelphia.

Fibrex is actually a combination of wood and a plastic polymer, giving it the properties of both vinyl and wooden frames. Like vinyl, Fibrex doesn’t need to be painted (as the vinyl looks simply marvelous even without coating), and requires little maintenance. Additionally, Fibrex has the superior insulating properties of wooden frames without the shrinking and warping risks.

Such features are especially useful for this chilly winter season, wherein the cold can easily slip through or permeate windows; old ones won’t fare well against the bitter cold and could in fact lower a household’s heating capabilities, thus warranting replacement. Fibrex windows will serve homeowners well, though they will have to be installed professionally for best results. Only official Renewal by Andersen® dealers are licensed to accomplish Fibrex window installation in NJ, so householders like you should look for certification before hiring a contractor. 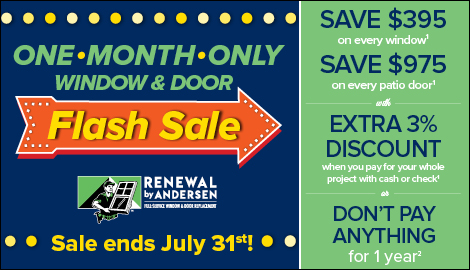 Creating “Green” Fibrex® Windows for Philadelphia and Camden NJ Area Homes In order to produce truly energy and environmentally efficient products, a manufacturer must do more than use materials that will save homeowners on their monthly energy bills. While this is a noble endeavor, if these … END_OF_DOCUMENT_TOKEN_TO_BE_REPLACED